What makes Damian's Race so special? 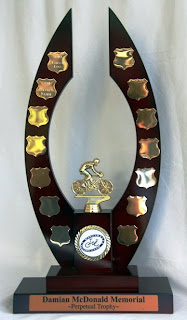 Damians' Race is a trophy race for bottom-age JM17 (under 17 men) riders.

Open to fifteen year old Cycling Australia GOLD licence holders (all those born in 1998), we hope it evolves into a race where the stars of tomorrow get an early chance to shine, while their top-age contemporaries battle it out with the men in the graded races. 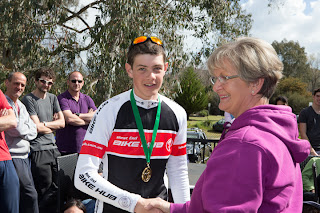 An initiative of Wangaratta Cycling Club, local rider Tomarsh Loki (pictured left, in 2012 with Damians' mum Amelia Edwards) won the first event in 2010. The race was being run as a Handicap for riders J17 and under, at the WCC's home turf of Wangaratta. 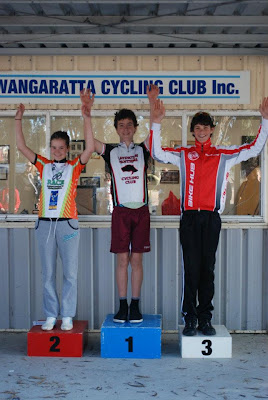 The following year Stephen Damm (Lavington Panthers Cycling Club) took the honours at the Wangaratta Saleyards, in front of Nicole Clark and Tomarsh (on the podium again!). 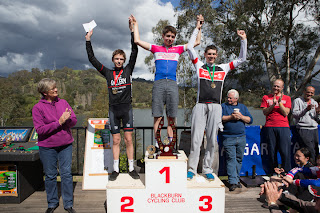 In 2012, with the move to Eildon, and the "reclassification" of the race to a scratch race for bottom-age JM17 riders, Blackburn Cycling Club rider Kurt Santagada capped off a stellar season with a win, from Club-mate James Moffat and former winner Tomarsh.

When asked about the origins of the race and it's name, Damians'  brother (and current Wangaratta Cycling Club President) Dean McDonald replied "Mum was the one who suggested the race, as Damian was always really good with younger riders, not only in the AIS team but also at club level. He was called Papa Mac by the guys in the team."

The future of this great sport lies in the younger generations. Wangaratta Cycling Club trust Damians' Race encourages juniors to race for a perpetual trophy, to bring a rich cycling history to life, and to celebrate the achievement and contribution of one of their greats. 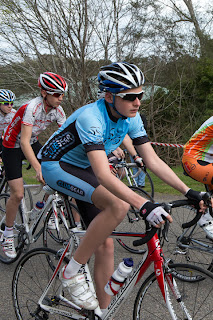 Nephew of Damian, Thomas McDonald (WCC) riding as an Under 15 rider in 2012. He races Damians' Race in 2013 for the chance to get his name on the Perpetual Trophy. Good Luck!