In 2012, Jason Spencer (Blackburn Cycling Club) waited patiently until halfway up the Skyline hill-climb to play his cards. Before reeling in an all-day break, he and a select bunch briefly enjoyed the summit's ascent and hunted down the remains of the break over the next twenty kilometers of undulating countryside. Entering Eildon together, Jason out-gunned his brother in a two-up sprint for the line, taking a well deserved win by a throw.

Jason, riding in 2012 for Budget Forklifts, has moved into a lead role at the power-house Charter Mason Drapac Development Team in 2013.  Adding significantly to his palmares in many National Road Series and Victorian Road Series races since, Jase thrives at Baw Baw (1st) and Tour of Bright (2nd overall).


Past Winners.
Click on the Year to see full race results.


In 2011, Chris Winn (Carnegie Caufield Cycling Club) enjoyed a tough day out on a beautiful course to post a strong win in this event. Chris returned to the United States to pick up a new contract with the Colorado-based Horizon Organic/ Panache Cycling Team , and continues his development as a Pro rider.

You can see his recent exploits on his blog, here. 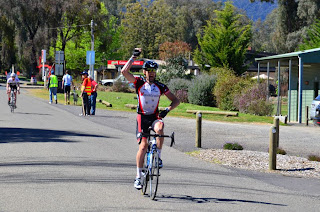