Damian McDonald originally hailed from Wangaratta, where his family continue to contribute to Victorian Cycling.  He took up membership at Blackburn CC following a move south, and his career flourished.

He represented Australia at the 1992 Barcelona Olympics, 1994 Commonwealth Games and 1996 Atlanta Olympics.

Damian was inducted as a life member of Blackburn Cycling Club 1992.  His life was cut tragically short aged 34 in 2007 and at the time Cycling Australia CEO, Graham Fredericks reflected;

“ Damian played a prominent role in Australia’s road cycling high performance program in the 1990’s and was a valued member of the Australian Road Cycling Team in World Championship, Commonwealth Games and Olympic Games Competition.  He will be sadly missed by his many friends within the cycling community. 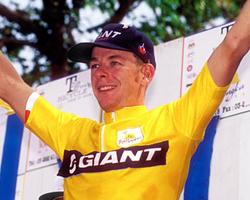